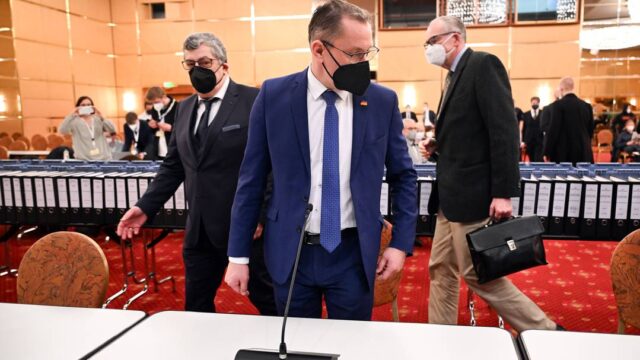 Berlin. According to a decision by the Cologne administrative court, the Federal Office for the Protection of the Constitution may classify the AfD as a suspected right-wing extremist. A corresponding lawsuit by the AfD will be dismissed, the court said on Tuesday.

That’s how the day went in court

The chandeliers gleam under the ceiling of the Crystal Hall in Cologne’s exhibition center, and dozens of files and briefs stand in the hall below like props for a play. 5,500 pages of files, 2,000 pages of court opinions. In the corona-related alternative location, the Cologne Administrative Court will negotiate the most explosive political and legal issue of the present day in Germany on Tuesday and Wednesday. Can the Federal Office for the Protection of the Constitution (BfV) observe the AfD nationwide as a suspected right-wing extremist with secret service means? Four lawsuits filed by the party against the domestic secret service were negotiated. Among other things, it is about the observation of the formally dissolved right-wing extremist “wing” of the party and the youth organization “Junge Alternative” as well as the classification of the federal party as a suspected case. Tino Chrupalla, chairman of the AfD, is waiting in the so-called “crystal hall” of the Cologne trade fair, which has been converted into a courtroom for the trial. © Source: Federico Gambarini/dpa AfD boss Tino Chrupalla came to the hearing. He speaks of a “show trial” and sees “freedom of expression in danger”. In recent years, the party has put considerable effort and resources into presenting the protection of the constitution as politically controlled. A “working group for the protection of the constitution” at the federal executive board, which worked internally and called for rhetorical moderation in anti-democratic statements by party representatives, was dissolved in 2021.

The presiding judge Michael Huschens leads the complex process confidently, calmly and with a pinch of irony. The arguments of the lawyers of the AfD and the BfV are often presented outside the courtroom: The service must justify from publicly available sources why an observation with secret service means is indicated. The AfD wants to use the mildest possible interpretation of statements by leading representatives that are considered racist and anti-democratic. The Saxony-Anhalt state deputy, Hans-Thomas Tillschneider, describes the German national football team as a “motley mercenary squad”. The BfV sees this as an indication of an ethno-national understanding of the state that violates the Basic Law. AfD lawyer Christian Conrad from the Cologne law firm Höcker dismisses: “No one says that people of color are second-class Germans.” AfD representatives felt hope when the lawyer for the protection of the constitution, Wolfgang Roth, explained that it was unclear whether the right-wing extremist and formally dissolved “wing” around the Thuringian state leader Björn Höcke still existed in the party. Conrad emphasized in the negotiation: “The wing no longer exists.” He had dissolved. That is currently being examined, said Roth. However, he later made it clear that “the ideology and political objectives of the wing are contained in the party and the main forces of the wing are active in the party”.

Chrupalla, on the other hand, emphasized that his party could not be classified as right-wing extremist. About the President of the Federal Office for the Protection of the Constitution, Thomas Haldenwang, Cer said on the fringes of the process: “Mr. Haldenwang said in October 2020 in the Interior Committee of the Bundestag that the AfD is not a right-wing extremist party. So we ask the other way around: what has changed since then?” The party leader did not yet know that the constitutional protection lawyer Roth also put it on record that classifying the entire AfD as a secured right-wing extremist effort is not currently planned. The power struggles in the party were still ongoing, so the AfD had to be observed as a suspected case. Some statements by the presiding judge Huschens already indicated that the classification of the AfD as a suspected case, which was the subject of the most important case, could be permissible: “The well-fortified democracy does not have to wait until the child has fallen into the well,” said he. And this sentence was also said: “If there is a smell of oil on the surface, it is permissible to use a test drilling to find out whether there is oil in the ground.” Chrupalla said after the end of the process that he had “the verdict on classification as a suspected case surprised”. The AfD will “wait for the written reasons for the judgment and examine them carefully and then decide whether we will lodge further appeals”.