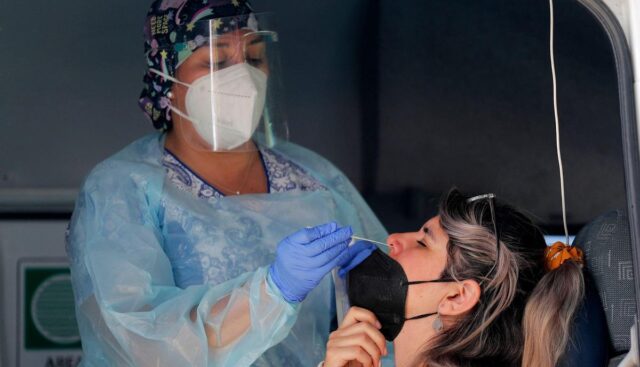 The Swiss Covid-19 Task Force has published a new report on the epidemiological situation. The number of confirmed corona cases increases after the federal government’s opening steps, especially the omicron sub-variant BA.2.

1 / 8In Switzerland, the omicron variant BA.2 is currently responsible for most Covid-19 cases. AFPFor a few weeks, BA.1 has had competition from its own ranks with BA.2. While the proportion of BA.1 decreases, that of BA.2 increases. Cov-spectrum.orgBoth BA.1 and BA.2 belong – among other members – to the omicron family, which are genetically closely related but each have mutations that could change their behavior. next strain

Almost three weeks after the end of the corona measures in Switzerland, the experts of the Swiss Covid Science Task Force observed an increase in the R value (number of reproductions): if it was significantly below one in mid-February, it has been significantly above this week Eins.The national Covid-19 Science Task Force stated in the latest scientific update on the epidemiological situation on Monday that the rising trend is also being observed in wastewater samples. The increase in the number of cases also affects those over 60, “which could lead to an increase in hospitalizations in the next few days,” write the scientists. Specifically: In contrast to last week, hospital admissions and the occupancy of intensive care beds are no longer significantly reduced. The Omicron variants BA.1 and BA.2 are currently circulating. While subvariant BA.1 was detected with a frequency of over 95 percent up until the end of December, omicron subvariant BA.2 is now increasing. According to the Task Force, BA.2 made up 42 percent of sequenced samples at the end of February.

“The renewed increase in reported cases seems to be due to both the spread of BA.2 and the opening steps (editor’s note of February 16),” says the latest report. From this, the experts conclude that BA.2 is transmitted more easily than BA.1. In terms of reinfection data, the new data suggest that infection with subvariant BA.1 generates strong cross-immunity to infection with BA.2. Vaccination protects people against symptomatic infection when they contract BA.2 as well as BA.1. However, the treatment of patients with BA.2 infection is not the same as that of those who contract BA.1 infected: The monoclonal antibody sotrovimab is less effective in BA.2 and is currently severely restricted as an antiviral treatment option in Switzerland. In addition to BA.1 and BA.2, the WHO lists two other subvariants of the omicron family: BA.1.1 .529 and BA.3. All are closely related genetically, but each carry mutations that could alter their behavior.Are you or is someone you know struggling with the Corona period? As a member, you become part of the 20-minute community and benefit from great benefits and exclusive competitions every day!
[ad_2]