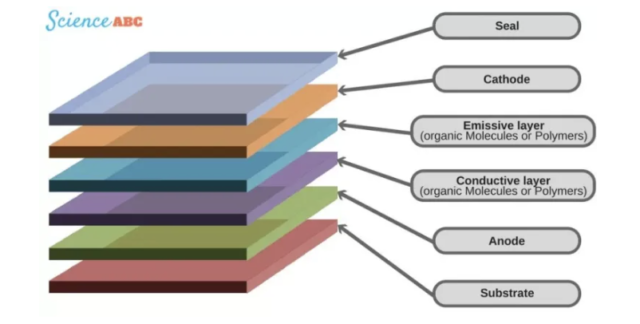 What is an OLED display?

OLED is short for Organic Light-Emitting Diode and is one of the newest display technologies on the market, commonly used in TVs, laptops, smartphones, and other modern electronic devices. The main difference from other display technologies, such as LCD, is the fact that OLED uses organic compounds that produce light when electricity passes through them. OLED emits its own light and doesn’t require backlights for this task.

How is OLED built?

The typical OLED screen has six layers. On one side, we have a seal, which protects all the elements from the outside world. And on the other flank, there’s a substrate, also known as the base of the OLED. Both of these layers are constructed out of glass or plastic, and between them, we have four additional layers: an anode, cathode, emissive layer, and conductive layer. All of these elements are crucial for light production. The current passes from the cathode to the anode and goes through the emissive and conductive layers, creating light full of colors.

Learn about the main benefits of OLED displays

As we mentioned before, OLED displays don’t have backlights, and that makes them more energy-efficient than other technologies. Their power consumption is also significantly reduced because the energy is emitted only when the pixel is active, as opposed to backlights which need to be powered on all the time. The lack of backlights has another benefit which is the improved flexibility of the OLED displays. Screens made with this technology can be curved, rolled, and even folded without losing their good viewing angles.

On top of that, OLEDs are much thinner and lighter than other display technologies. Faster response time is also an advantage worth mentioning, as this factor is essential for gaming or experiencing virtual reality. Another benefit of OLED displays is their influence on the eyes of the viewers. Because this solution emits less blue light than others (34% compared to 65% in LCDs), it’s a much healthier choice. Devices with OLED technology have an impressive lifespan as well and can reach about 22 years with everyday use. The viewers highlight their spectacular color contrasts as well and mention that they’re not compromised even at wider viewing angles.

Of course, there are various types of OLED displays, and the most popular one is called AMOLED, often seen on TVs or smartphones. It’s a type of active-matrix OLED that incorporates TFTs (thin-film transistors) and improves the efficiency of the devices.  PMOLEDs, on the other hand, are passive-matrix OLEDs without TFTs and are not that energy-efficient. The family of OLEDs includes PLEDs and  QD-OLEDs as well.