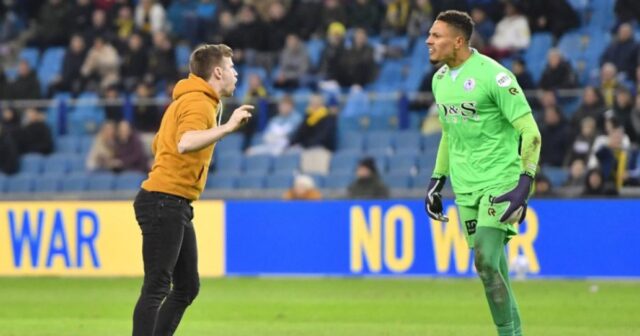 According to the Arnhem club, the field stormer at the match between Vitesse and Sparta Rotterdam last Friday was ‘a lost German who had lost a bet.’ Vitesse also further elaborates on the recent misbehavior of a number of ‘supporters’.
‘Back together to a safe and atmospheric football party’: under that headline, Vitesse discusses recent events on the club website. The absolute low point was the discontinued match against Sparta. Maduka Okoye, the goalkeeper of the Rotterdam team, was harassed by a field stormer and not much later a cup of beer was thrown against his head. When fireworks were also thrown towards Sparta’s goal, arbitrator Rob Dieperink sent the players in. The annoying thing for Vitesse is that last Friday’s field stormer was ‘a lost German’. ‘The clash with Sparta was overshadowed by the misbehavior of a few individuals, who ruined it for the vast majority. In some cases it is even about a loner who has never been to GelreDome. For example, think of Friday’s field stormer; a lost German, with a lost bet. Completely unaware of what damage he would cause with his action,” said Vitesse on the club’s website. Vitesse has recently handed out ‘dozens’ of stadium bans, it indicates. But it doesn’t stop there. “Meanwhile, the security authorities are not only demanding tough measures from the club, but are also threatening severe sanctions against the supporters. But perhaps the worst thing is that a number of supporters no longer always feel safe or comfortable in the stadium. Families and children sometimes prefer to stay at home. That can’t and shouldn’t be the case, can it?’

The images: Okoye harassed and pelted, also fireworks next to the target