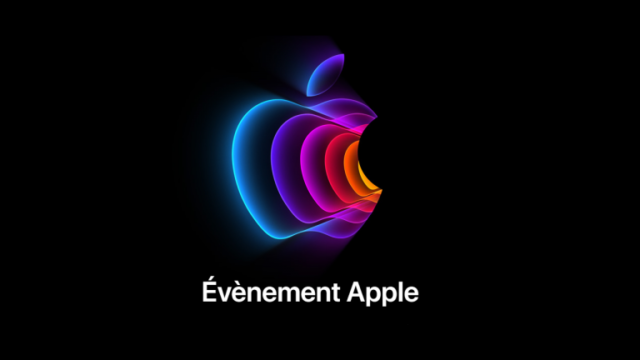 Live Feed Live from the Apple Keynote 2022: iPhone SE, iPad, MacBook, M2 chip… Published on 03/08/2022 at 4:00 p.m. for this year. This conference will start at 7 p.m. on March 08 and you can follow all the announcements directly in this article. During this event, we expect something new on the side of the iPhone SE, iPad Air, but also in processors with the probable release of the M2 that we hope to announce in the evening.

iPhone SE, iPad Air, M2 Processor… What are the announcements expected during this Apple Keynote

An Apple Keynote is an event that everyone is waiting for! This conference, which is the time for Apple to highlight the next innovations, we are entitled to expect announcements that will be landmarks. We are following the event closely and we will update this Live as announcements are made.

Last October, we were treated to some great announcements from Apple. The American giant had notably presented 2 new chips, the M1 Pro and M1 Max which rivaled their competitors in power, even exceeding them in the benchmarks. With the 12th generation of processors, its rivals have managed to climb the slope and that is why we can expect the arrival of a whole new generation of processor: the M2. This would also correspond perfectly with this year’s slogan: “Peek performance” which seems to be a clever play on words between peak performance (peak performance) and peek which means a look or a glimpse. the perfect opportunity to announce a new generation of MacBook Air which would be equipped with it.

But it is not necessarily on the M2 that expectations are the most important. Indeed, we should have a presentation of an iPhone SE after almost two years of absence. Indeed, the previous generation model was released in 2020. Rumors say that it will have an A15 Bionic chip like the iPhone 13 and it should be compatible with 5G! On the screen side, we should stay on 4.7 inches with a single photo sensor on the back. Finally, we expect a fairly low price to remain the cheapest iPhone on the market.

Another possibility: the announcement of a new generation of iPad Air. The apple brand could well offer its fifth generation of touch pads tonight, with the added bonus of a new SoC. It could benefit from a brand new front camera as well as an update to iPadOS which equips the firm’s tablets.

Among the leaks, there is also a possible release of a compact Mac, called the Mac Studio and which would be equipped with an M1 Max chip. About twice as thick as a Mac Mini, however, this leak raises questions. Indeed, it would seem quite surprising that the Cupertino company announces both a new series of processors, the M2, and a device that is based on the old version.

A new screen could also be announced according to several sources, including Ming-Chi Kuo, a leaker known to be quite reliable. With a diagonal of 27 inches, it would be the ideal accompaniment to the Mac Studio. According to the leaks, the screen would be equipped with an Ax processor borrowed from iPhones.

Could this be the arrival of the Apple Watch SE 2? Several rumors are present on the net, including a potential sport-oriented Apple Watch model that would target a new audience. Another hypothesis is the release of a new version of the AirPods Pro with a new design and a new audio chip. Finally, it may finally be time to announce the Apple Glass, glasses / virtual reality helmet. We’ll know more in a few hours! By Durvil_Amegeek, Editorial jeuxvideo.com MP
[ad_2]