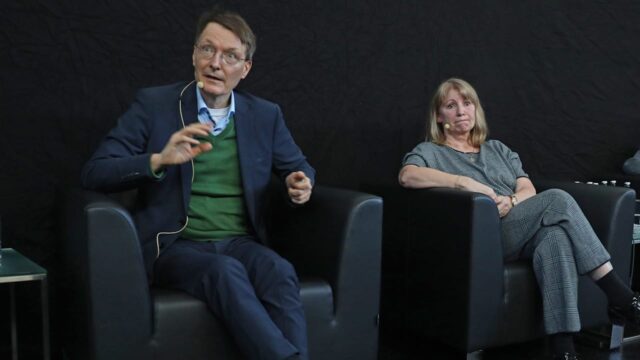 Dresden – At a panel discussion at the Dresden University Hospital with those affected from Dippoldiswalde, the Federal Health Minister Karl Lauterbach (59, SPD) was unyielding when he was asked about the so-called “facility-related compulsory vaccination”. “The law applies and must be implemented,” says Lauterbach. In view of an average of 30 percent unvaccinated medical and nursing staff in Saxony, he said: “We are trying to increase the vaccination rate through persuasion and incentives.” the capacity must be reduced.” In plain language: Lauterbach ultimately wants to have unvaccinated personnel fired harshly – at the expense of security of supply. Patients or elderly people to be cared for, for whom there is no longer any staff, would then have to be put on the street. Lauterbach, who had entered the ongoing discussion half an hour too late, avoided a corresponding BILD request. “This is an exaggeration that doesn’t get to the point.” Read also Saxony’s Health Minister Köpping had previously assured (unvaccinated) doctors and nurses that the top priority was security of supply. “And the affected institutions decide on this,” said the minister. The medical director of the university hospital, Prof. Michael Albrecht (71), went even further. Although he is a vehement advocate of vaccination, the situation in many facilities in Saxony contributes to the further division of the workforce into those who have been vaccinated and those who have not. He could imagine a suspension of the “facility-related vaccination requirement” as a compromise. Lauterbach, however, remained adamant, calling the vaccination requirement correct and necessary. After all, 300 people would still die every day “from the allegedly mild omicron variant”. The Head of Clinical Infectious Diseases at the University Hospital Carl Gustav Carus, Dr. Katja de With, on the other hand, reported from clinical practice that there are currently no corona patients suffering from omicron in the intensive care units. “The ones we have there are all sort of old Delta cases”