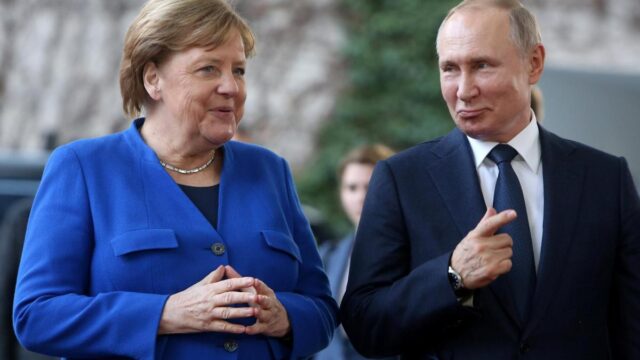 [ad_1]
Is the war in Ukraine escalating into a global conflict? This is what the media at home and abroad are asking themselves. After Russia’s attack on the country, the political and economic course set in recent years has also come under increasing scrutiny. An overview of the press reviews. >>> Read all developments on the war in Ukraine in the live ticker >>>

“Wars can change reputations, even after the fact. Two leaders whose legacies look far worse in light of the war in Ukraine are Angela Merkel and Barack Obama. The former German chancellor made her country hostage to Russian energy, completely misjudged Vladimir Putin and did far too little to defend NATO. Her successor discarded her inheritance within a week. Obama should be remembered as the president who refused to sell lethal defense weapons to Ukraine — even after Putin seized Crimea in 2014. He didn’t even want to sell Javelin anti-tank weapons, which are now helping the Ukrainian military to stop the invading Russian army. (…) Obama said (in a 2016 interview) that Ukraine “will be vulnerable to Russian military dominance no matter what we do”.(…) Even throughout his presidency, Obama failed to understand that the “nature of power in foreign affairs” still includes military power. Mr. Putin clearly sees it that way.” Also read The West’s Strategy Dilemma

“Aftonbladet” (Sweden): As long as we buy gas, Putin can continue to wage war

“International companies are boycotting, taking a stand and showing solidarity. Against Putin’s Russia, for Ukraine. This is absolutely necessary. But while Ikea and H&M, for example, are shutting down operations in Russia, this threatens to become meaningless symbolic actions in the face of Russian gas exports. Nord Stream supplies Russian gas to the US and EU. While Nord Stream 2 has been stopped, Nord Stream 1 continues to pump gas. Gas, on which we are completely dependent. On the one hand, we are imposing sanctions on Russia and working to arm Ukraine militarily. On the other hand, we buy the gas that is used for the very warfare that we are now seeing in Ukraine. The sanctions are tough, but can become toothless over time if the big bucks keep flowing. Through gas pipelines to Sweden, the EU and the USA.”

“At a summit meeting in Versailles, the EU heads of state and government want to discuss a strategy to drastically reduce dependence on Russian energy supplies. But implementing something like this takes time, and time is short. The strongest European player, Germany, simply stalls without Russian gas. The planned phase-out of nuclear energy will inevitably come under pressure, just like ours. But it is still better to extend the service life of existing nuclear power plants than to return to polluting hard coal and lignite. However, the greatest challenge will be to organize European energy solidarity. In addition to an agreement on a fair distribution of the burden of the refugee crisis, there urgently needs to be a deal on the consequences of the war on the energy sector. The sooner we can start turning off gas from Russia, the sooner Putin’s war machine can be brought to a halt.”

“How could it happen that Merkel led us into this dependence on Russia?”

Chancellor Olaf Scholz rejects a complete stop to energy supplies from Russia. “I understand the federal government,” says columnist Jan Fleischhauer in the WELT interview. He sees the mistake in Angela Merkel.

“De Tijd” (also Belgium): Energy is used as a weapon

“The Russian invasion of Ukraine is not a short-lived conflict after which business as usual continues. It is proving to be the dangerous beginning of a new era in which geopolitical tensions and threats of war have returned to our EU’s external borders. Energy is used as a weapon. There are radical options in this struggle, including cutting off all Russian energy supplies. This option may seem bold, but it would probably be stupid. It would drive prices up and add to our bill. Meanwhile, Russia sells its energy to China and other non-sanctions countries at high prices and higher profits. The West would have higher costs, but the flow of money into the Russian war machine would not dry up. The unfortunate consequence is that energy policy is bound to remain difficult in the coming years. We will continue to have to trade with dubious regimes, probably including Russia. We are no longer in the luxurious position of being able to shut down all nuclear power plants.”

“Rzeczpospolita” (Poland): Will we soon experience the same as the people of Kiev?

“Putin not only has not paused in his war, he is waging it even more brutally. He plays for everything. The political leadership and the elite of Ukraine are also fighting for everything, including survival. They would like to go under the umbrella of NATO and the EU immediately. But although the attitude of politicians in the Old West has changed, although there are many expressions of solidarity in Western public opinion – this will not happen immediately. Worse still, it probably won’t happen by the end of this war. And even worse, this time for those who feel safe not living in Ukraine: Putin is ready to involve others in his war. He makes it clear, and you can believe him on this point: “If I have to lose, then everyone should lose.” The experiences of the people in Kyiv could quickly become ours too. We don’t even know if what we’re doing during the Russian attack on Ukraine has any bearing on it.” Read also sanctions against Russia

“Visa, Mastercard and American Express are pulling out of Russia, throwing out government supporters and those who paid with credit cards VPNs (Virtual Private Network – ability to bypass internet blocks) that help bypass censorship on opposition websites , back to the age of cash. But the internet might not last long either: even before the Kremlin finally isolates it from the world, the major software and hardware manufacturers from Microsoft to Nvidia are withdrawing support from Russian customers and the government is considering it, in a glorious return to the 1990s, when there was not a single legal license for Word in all of Russia to decriminalize piracy. Now those nostalgic for the Soviet Union can dive back in time: while Putin is threatening to use the atomic bomb, a bomb has already fallen on the Russian economy, setting it back by 30 years, maybe more: since 1991, Russians have been used to full shops, to the fruits of globalization acquired thanks to the proceeds of oil and gas.”

“First, Putin turned Russia into a dictatorship. Now the remaining air holes are also closed. Repression of those who want to protest the war – or simply face the facts that there is a war – has increased dramatically. Several independent Russian media have been shut down. A law came into force on Saturday making it a punishable offense to even call the war a war. Facebook has been blocked. The truth has long lived dangerously in Vladimir Putin’s Russia. Disinformation and propaganda are central tools in the exercise of power. Inconvenient journalists are threatened and murdered. Now the truth must not even be expressed. A way back into the European warmth is unthinkable for Putin after the large-scale invasion. With the invasion, he erected a new Iron Curtain instead. On the one hand a democratic Europe. And on the other – a new Soviet Union? Hardly synonymous with superpower. But maybe in the sense that it will become a totalitarian society. A new North Korea. Totalitarian, isolated, impoverished.”
[ad_2]