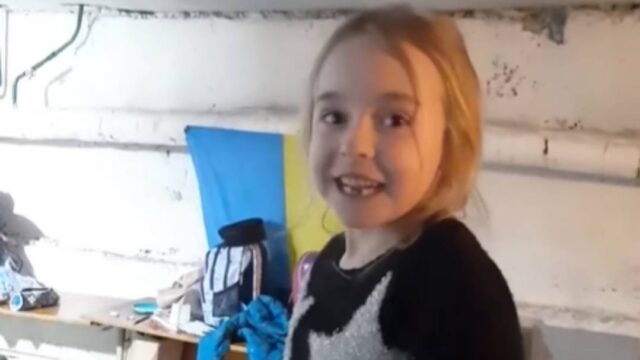 [ad_1]
Kyiv. It is a video that goes around the world and moves millions of people: A little girl, allegedly recorded in an air raid shelter in the Ukrainian capital of Kyiv, sings the song “Let It Go” (German “Let go now”) in Russian from the Disney movie Frozen. The almost two-minute clip has now been shared millions of times on social media and even the singer of the original, the musical actress Idina Menzel, has spoken out. +++ Follow all the news about Putin’s war in the live blog +++ The video was apparently first published on March 3 by a Facebook user from Ukraine. The girl, who she says is called Amelia, told her in the air raid shelter that she likes to sing and that she dreams of being on stage in front of a large audience later, the woman writes. Then Amelia intoned the song from the Disney fairy tale “Frozen”. “Even men couldn’t hold back their tears,” the woman writes about the video, which she probably published with the permission of the girl’s mother. The footage also shows a mother with a stroller wiping tears from her face. “Amelia, your singing left no one indifferent! Look Russians who you’re fighting against,” the Facebook post continued. Since it was published, the clip has been viewed and shared millions of times on social media, and people are also touched by the scene on Twitter, Instagram and Tiktok. Among them is Idina Menzel, who speaks and sings the role of Elsa in the original English version of Frozen. “We see you. We really see you,” writes the musical star, followed by a blue and a yellow heart.
[ad_2]