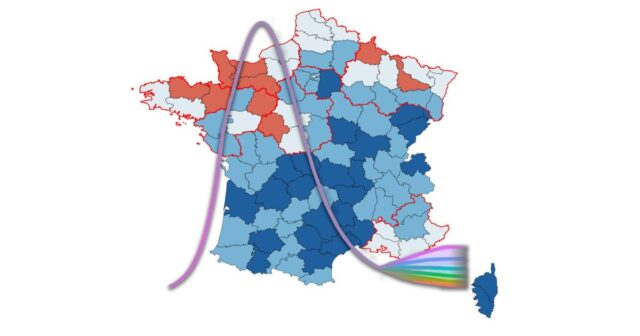 The HuffPostThe number of Covid-19 cases has stopped falling, but the recovery should be limited, provided that the immunity provided by Omicron does not decrease too quickly.SCIENCE – While the eyes of the whole world are on the Ukraine and Russia, is the coronavirus playing a bad trick on us? In recent days, the drastic decline of the fifth wave has stopped. Worse, the number of positive cases even seems to be on the rise. Even though the end of the vaccination pass and the indoor mask is scheduled in a week. However, there is no reason to panic at the moment. First, because this recovery, which could be partly due to the start of the school year, is still light and uncertain. Then, because there is a good chance that the increase to come will be small. Simon Cauchemez, modeler for the Pasteur Institute, even slips us to be “rather optimistic for the weeks to come”. On one condition, however.

A rise in sectorized cases

Above all, it should be remembered that the situation is not the same everywhere in France. The incidence rate increases over a week in less than ten departments. Generally speaking, when looking at the map of metropolitan France, a trend seems to emerge: the end of the decline in cases is more pronounced in regions where the school holidays ended earlier. This distinction is even more striking if the the average incidence in the departments is compared according to the holiday zones. The start of the school year took place on February 21 in zone B, February 28 in zone A and March 7 in zone C. As can be seen in the graph below, the incidence increases in zone B among those under 18 years, especially among the youngest (mostly unvaccinated). In zone A, a plateau is emerging while in zone C, the number of cases continues to fall. “It is not surprising that the holidays have an impact” on the circulation of the virus, recalls Simon Cauchemez. But if the incidence is increasing, so is the number of tests carried out among the youngest, as can be seen in the graph below. So could this increase in incidence be partly due to a simple change in the detection system?“It is always difficult to fully characterize how detection rates change over time, but if we look back, each time the dynamics changed, it was not simply due to a change in the screening system”, specifies the modeler.

Cases on the rise, but moderately

Especially since this epidemic recovery sticks rather well with the latest models from the Institut Pasteur, published on February 21. “The objective was to look at the impact of the Omicron sub-variant, BA.2, as well as that of a change in behavior”, explains Simon Cauchemez. According to the scenarios considered, BA.2 alone could not create an epidemic rebound, because its transmission advantage is too small compared to the vaccination coverage and the immunity acquired by the huge wave caused by Omicron. On the other hand, if the French were changing their behavior, the model predicted a plateau, or even a rebound in the Covid-19 epidemic. “We had assumed a loosening in early March, but the current plateau is occurring earlier than expected. If we make the model stick to reality, this suggests that a relaxation in behavior took place from February 22”, specifies the researcher. The good news in all this is that even with a significant increase of our at-risk contacts and therefore of the transmission of the virus (+50%), the model predicts a sixth wave disproportionate to the previous one, as can be seen in the graph below, which takes into account a change in behaviors as of February 22. Institut PasteurThe evolution of the number of cases of the Institut Pasteur model according to different scenarios of increased contact (and therefore transmission of the virus).

The duration of immunity, a big unknown

The reason? Once again, vaccination and the fifth wave mean that there are no longer enough people likely to be infected with the coronavirus for the epidemic to start again at a gallop. Obviously, the models are not perfect. They can be wrong if the assumptions made to imagine future scenarios are not the right ones. And if Simon Cauchemez wants to be optimistic for the weeks to come, there is for him a hypothesis, rather optimistic, which remains uncertain: the duration of the immunity conferred by Omicron. “We considered that the immunity acquired after an infection did not drop until April 1 when our simulations stop. But that’s a pretty strong assumption that could make our projections too optimistic,” he cautions. “That’s why we stop our projections at April 1, saying that this assumption is acceptable for the very short term but not beyond”. The Institut Pasteur is already working to perfect its model which will take into account the duration of immunity. “In a few weeks, we should be able to carry out scenarios for a more distant horizon, until next winter”. In the meantime, we can only hope that the current model was right. And to remember that even in the event of a relatively large wave, the virulence of Omicron coupled with our level of immunity should reduce the proportion of serious forms compared to the first waves of the pandemic.See also on The HuffPost: Why we continue to clean surfaces against the Covid (when it is useless)