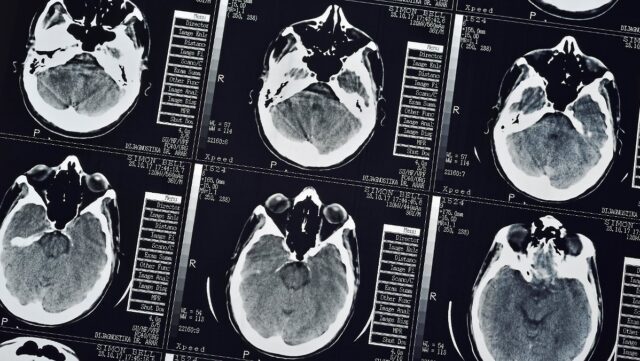 Loss of smell and confusion, these are two symptoms that people infected with corona report again and again. A British research team sees the causes of these symptoms on MRI scans: damage to the brain that is apparently caused by the corona virus.
According to a study, a Covid-19 infection can result in brain damage. According to this, Covid-19 can shrink the brain and reduce the gray matter in the regions that control emotions and memory. It can also damage areas that control the sense of smell, according to research from Oxford University. The study, published in the journal Nature, looked at the brain changes in 785 subjects aged 51 to 81. The brains of the study participants were scanned twice. 401 people contracted Covid-19 between the two scans. The second scan took place an average of 141 days after the first. “There is strong evidence of brain-related abnormalities in Covid-19,” the scientists said. Even in mild cases, the study participants showed a deterioration in the brain functions responsible for concentration and organization. On average, brain size shrank between 0.2 and 2 percent. Those who had Covid-19 lost an additional 1.8 percent of the parahippocampal gyrus, a key region for smell, and an additional 0.8 percent of the cerebellum compared to controls.

As a rule, those infected also performed worse on a test of mental abilities than non-infected people. The lower levels were associated with greater loss of brain tissue in parts of the cerebellum. The losses are equivalent to aging in about ten years. These effects have even been observed in people who did not come to the hospital for their infection. According to the researchers, the results provide impressive evidence of the effects of the virus on the central nervous system. Whether the damage can be partially reversed or whether it will persist in the long term needs to be researched further. ‘The brain is plastic, which means that to a certain extent it can reorganize and heal itself even in older people,’ said Prof Gwenaëlle Douaud of the University of Oxford. The study took place at a time when the alpha variant was still dominant in Great Britain. It is therefore unlikely that it also includes people who were infected with the Delta variant. The researchers left open whether a corona vaccination had any influence. However, the British health authority said in February that an evaluation of 15 studies showed that vaccinated people were only about half as likely to suffer from Long Covid, the long-term consequences of the disease observed in some patients. Sars-CoV-2 applies to unvaccinated people widely recognized as a respiratory pathogen, primarily affecting the lungs. However, neurological complications associated with the disease are consistently reported – including confusion, strokes and neuromuscular disorders during the acute phase of the disease. Difficulty concentrating, headaches, sensory disturbances, depression and even psychosis can last for months as part of Long Covid.