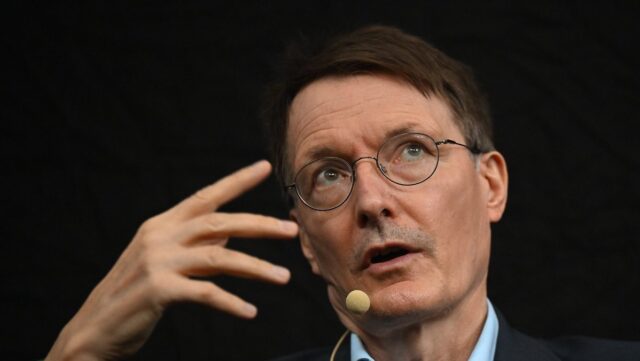 The legal basis for far-reaching corona restrictions expires on March 19. According to Health Minister Lauterbach, however, it is not yet possible without protective measures. He announces hotspot regulations for the time afterwards. A corresponding draft should go into the cabinet on Wednesday.
According to Federal Minister of Health Karl Lauterbach, the consultations on the corona rules, which should remain possible from March 20, are about to be completed. “We will definitely be able to come up with a proposal in the next few hours that will make important basic protective measures possible for the federal states,” said Lauterbach at a press conference with Saxony’s Health Minister Petra Köpping in Dresden. A so-called hotspot regulation will be an important one play role, explained the minister. Even after most corona measures have expired on March 20, it should enable “good protection” for the population in those areas where the number of new corona infections is particularly high. According to Lauterbach, the corresponding draft should go into the cabinet this Wednesday. “We may come to a conclusion in the next few hours,” the minister said. After that, the parliamentary groups are expected to deal with the proposals on Thursday. “The details have not yet been negotiated, but I can assure you that we are working intensively on it,” said Lauterbach. In a discussion with Saxony’s health minister on Facebook, he later said that a new infection protection law would definitely continue to make masks compulsory in certain areas. “That’s very clear. We’re not there yet to say: Mask off, Corona is over.” In the end, the citizens would decide for themselves when the mask would go away. That depends on whether you get vaccinated or not. According to a relaxation plan decided by the federal and state governments, “all more profound” corona restrictions are to be lifted on March 20, if the situation in the clinics allows it. The nationwide legal basis for such measures expires on March 19. A new basis for measures after this deadline would have to be launched this week so that the Bundestag can decide on it in good time.