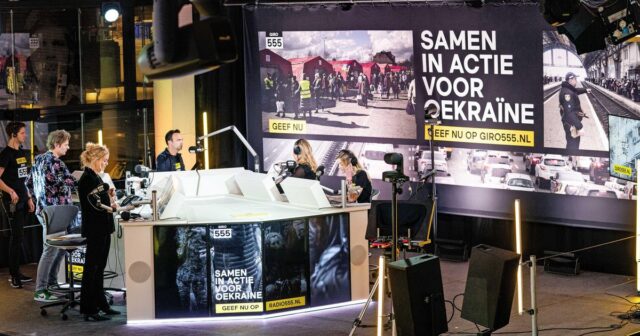 [ad_1]
The Giro555 counter was still at 21.4 million euros around 06:00, the moment when the special radio broadcast of Radio555 started in Hilversum. Radio555 was a collaboration between NPO Radio 2, NPO 3FM, NPO Radio 5, Qmusic, 100%NL, Radio 538, Radio10, Radio Veronica, SLAM! and Sublime. The TV program Together in action for Ukraine was broadcast between 8.30 pm and 11 pm on NPO 1, RTL 4 and SBS6. The TV program Together in action for Ukraine was from 8.30 pm to 11 pm and was broadcast on NPO 1 , RTL 4 and SBS6. During the TV promotion, presented by Chantal Janzen and Rob Kemps, people could call to donate money. Jeroen Pauw and Eva Jinek also participated in the program, they received guests at the table in the studio and interacted with correspondents in the region. Schreinemacher announced the cabinet’s donation during the broadcast. A humanitarian disaster is underway in Ukraine due to the invasion of Russia. Since the raid, hundreds of Ukrainians have been killed and injured and hundreds of thousands of residents have been displaced. So far, the Netherlands has already allocated 24.5 million euros for emergency aid, since the war broke out a week and a half ago. With the extra emergency aid, the total now comes to about 40 million euros. So far, only more money has been raised for Giro555 after the Asian Tsunami in 2004 (208 million euros) and the earthquake in Haiti (111 million euros) in 2010.
[ad_2]