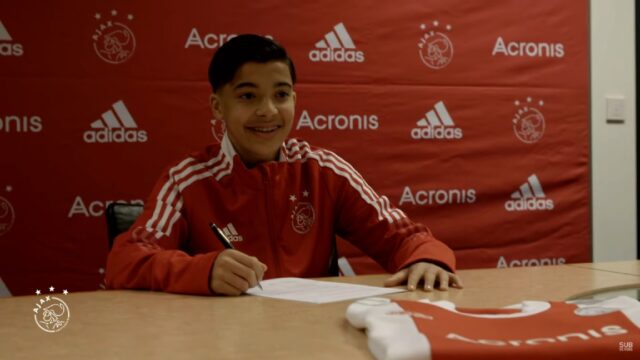 Tuesday, March 8, 2022 at 07:03 • Last update: 08:06 Rayane Bounida committed himself to Ajax on Monday until mid-2025, despite frantic attempts by Barcelona, ​​Paris Saint-Germain and Manchester City to free the sixteen-year-old from Anderlecht. He could earn much more there than in Amsterdam, but Abdelhak Nouri showed him the way. “Rayane wants to complete Appie’s abruptly interrupted dream,” says Bounida’s older brother Marwane. “The reason we chose Ajax is our strong bond with the Nouris.” De Telegraaf interviewed the family on Monday in Nouri’s specially furnished house in Amsterdam-West, a few hours before Rayane Bounida’s contract was signed. The former football player of Ajax pointed his brother Mo years ago, even before he was struck by a cardiac arrest and suffered serious, permanent brain damage, to the films of the Belgian talent. “Just like the Bounida family knew Appie, we knew who Rayane was. We had no contact with each other, but followed each other at a distance. Appie recognized a lot of herself in Rayane’s films, which went all over the world. My brother really enjoyed those images and every time he said, ‘How good is that boy!’”

It was Rayane who made the connection between the families at the age of twelve. He was allowed by Nike to give a signed ball to a fan, but he thought that was strange at his age. He decided to give the ball to his idol: Nouri. The leather is now part of his trophy cabinet in Amsterdam-West. “We as the Nouri family thought it was a great gesture that Marwane and he drove from Brussels to Amsterdam unannounced. That gave us support and we have really seen the Bounida family as our family ever since.” Mo and Marwane are now the agents of Bounida together and therefore had conversations with Ajax. “We are religious, but we do not believe in coincidence”, says Mo. “It just has to be that way. In the Bounida family we see the Belgian Nouri family. There are so many parallels. In the field, but also outside of it, Rayane resembles Appie. For 99 percent I see the same things: Rayane is also an exceptional footballer and a connector. We believe that Allah has written this for us.” Rayane Bounida played against Ajax several times with Anderlecht. Marwane Bounida emphasizes that a transfer to Spain, England or France was never a serious option. “Rayane didn’t want to live so far from his family, learn another language and make new friends. He made it easy for us. It was Anderlecht or Ajax, and Anderlecht were prepared to go very far.” “But to be honest, his choice had been made for months.” Ajax offers a tailor-made plan and the learning opportunities at De Toekomst also played a role in the decision. Initially, Bounida will join the Under 17 from next season. It is confronting for the Nouri family that Rayane will walk the road that became a dead end for Abdelhak due to fate. “But we are super happy and emotional because this is so beautiful. It feels like a reward that Rayane wants to complete Appie’s dream,” concludes Mo Nouri.